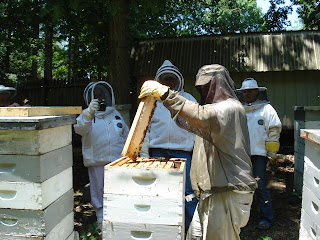 Today there were five members who spent the afternoon with Dean Womac in his Bee Yard and Honey Room.  Dean gave a tour of his honey room then off to the bee yard to do a little robbing.  Five full supers of honey were collected to be extracted.  However Dean will have plenty more honey to take later.  He will have a great honey year! 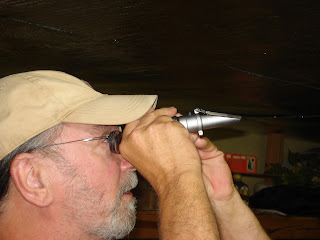 After the supers were gathered, time for extracting.  Dean showed the group how he uncapped his frames and then everyone had a chance for a little hands on.  The refractometer was also demonstrated on how to test the moisture content of the honey.  A moisture content of 16.5% was agreed on.  The extractor was loaded with 20 frames and the motor turned on.  Minutes later the frames were empty!  Honey was then emptied into a food grade bucket and transferred  into the honey storage tank.  The honey will stay in this container for a few days before bottling. 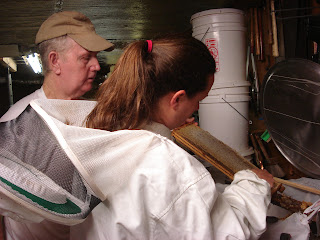 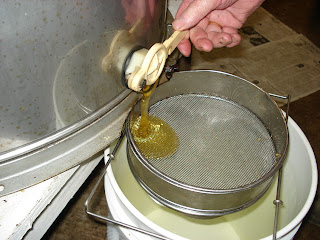 As the afternoon came to an end Dean gave everyone a bear bottle of HONEY!!!
Thank you Dean!!!!
Posted by Cherokee Beekeepers

Welcome!
The Cherokee Beekeepers Association is dedicated to the education and promotion of beekeeping. Our organization is made up of all levels of experience from the beginning beekeeper to those with years of commercial beekeeping experience. We welcome you to any of our meetings and activities!